A Real Artist at work

I have a customer http://www.backstageshop.co.uk who amongst other things is the UKs leading Theatre and special effects makeup supply company based in North London. Over the years I have made all manner of items for them, Electric Chairs, Gothic Candelabra, but most recently they have developed a steady trade in Illuminated Makeup Mirrors which I make.

This past weekend was the Theatre, and Film Makeup Artists Trade show in central London and I was asked if I could give them a hand on their stall and talk about the mirrors. Never one to pass on an interesting opportunity off I went and what an eye opener it was. I saw a demonstration of how to cut a throat on screen from the artists behind American Horror complete with spurting blood, and very realistic it was. Not something I had expected to see when I set out that morning.

Directly opposite us was a company that specialised in the products for high end prosethics for well known feature films. To promote this on the Saturday over the course of eight hours they transformed an attractive young lady into a balding old man complete with hairy chin. 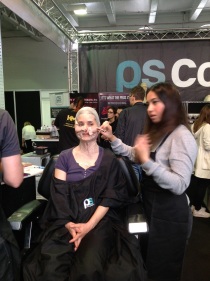 Being as I was there for the whole time in between customers I was able to study form, and slowly watch the transformation as each piece was artfully applied and added too.

On the Sunday we were treated to the creation of what I can only describe as an seven foot strawberry, which took over 6 hours of painstaking work airbrushing, and moulding 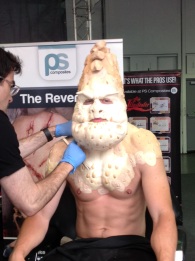 What they both had in common was three incredible makeup artists at the top of their game, demonstrating, and freely sharing their knowledge, and creating the most stunning end results, it was an absolute pleasure to watch, and I did pick up a few tips along with a few pots of silicon so watch this space.

1 Response to A Real Artist at work