If you don’t get the right result, is it still a success? 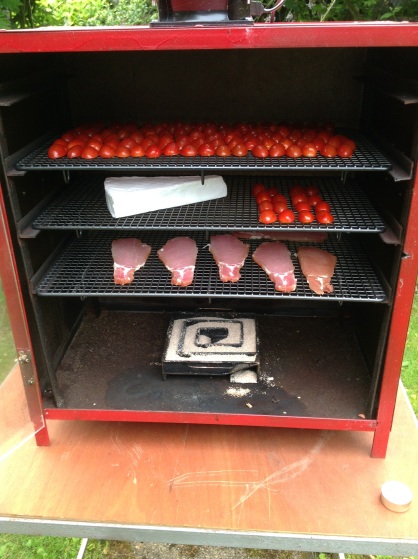 I am currently working on my latest book which is going to be on the subject of food smokers, how to build them, closely followed by what you can make in one.

Now over the years I have built several different types of smoker, but like everyone else I have a few firm favourite recipes which I keep coming back too. The obvious smoked salmon, smoked cheese, smoked butter for when your being adventurous, and the family favourite Hot Smoked Turkey for Christmas. I did suggest one year cooking the turkey another way, which was met with a stunned silence followed by an explosion. Apparently this is a Family  Christmas Tradition that cannot be broken

I digress. Last summer I made a combined Smoker / Dehydrator, which as the name suggests dehydrates something whilst at the same time imparting a Smokey flavour. The first thing I tried was smoking tomatoes, and that was a revelation as we ended up with smoked tomato powder. You wouldn’t want to eat a spoonful but sprinkle over pasta and its a delight. Most recently I tried a combination of tomato, onion, and mushroom, all smoked and dehydrated, then powdered, and the result was vegan Gravy Powder, someone suggested add beetroot to extend the depth of flavour – now there’s an idea.

All of which bring me to today. Now it so happens I have been booked to appear at the Forty Hall Food festival in August, and I have been thinking about what to demonstrate. Hopefully the new book will be ready, so its an ideal opportunity to feature something about smoking, but you only get a maximum of an hour, and ideally at the end you have something people can try. After several sleepless nights I ended up with the idea to make Smokey Bacon Crisps. They have potatoes and a fryer, I just need to provide the Smokey Bacon Flavour.

So several days ago I started out by curing a piece of pork to make bacon, which was then smoked overnight. Several slices then had to undergo a rigorous quality control procedure at lunch time, and a few more were sacrificed in order to get a second opinion, but as both opinions came from the same person I am not sure that counts. Having been deemed suitable I then trimmed the fat off a few slices and into the dehydrator they went along with tomatoes, which didn’t have anything to do with the experiment, just using the space and brie cheese although that only stayed for the smoking portion of the procedure, and very nice it was too.

Eighteen hours later, we ended up with smoked dehydrated bacon which was then transformed into powder and the result is shown below. Its too fibrous to be used as a powder for sprinkling over potato crisps, so from that point of view as an experiment its a failure. However it does taste very good, with a strong bacon flavour, sprinkled over anything it would be good, and I reckon over hot chips would be magnificent. One way to find out. Its a tough job but I am prepared to sacrifice my waist line so others don’t have too .

This still leaves me with a problem what do I do as an demo at the food fair? Are the good folk of North London ready for hot Smokey Bacon Chips?