Craftsmen today are not what they were! 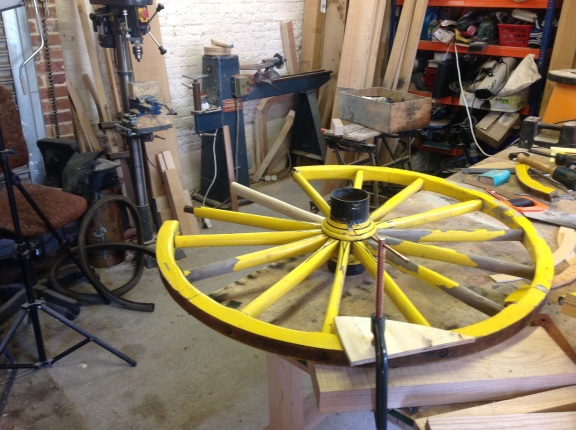 One of my current projects started out as “just replace the spoke” on a wheel dating from about 1880. Now as a rule I don’t rush to attract repair work, there are always issues, but like everyone else I have bills to pay, so if I get offered a repair job I look carefully but this one is proving to be the daddy of them all.

By the looks of it no one has touched this wheel since the day it was built. By that point in history, carriages were made in factories, maybe not quite as we think of them today but products were made in batches, and the workers in the largest establishments would perform a single task such as cutting felloes all day. In the smaller factories they would have someone who just made wheels. A carriage builder would have a series of standard size wheels they would use for their carriages, and depending upon the size of the operation these would be either brought in from a wheelwright or produced in their own shop. Whilst each manufacturer would have a standard range of sizes there wasn’t any standardisation across the industry. Therefore every set of wheels I get to work on is different.

By this point in time there was a degree of mechanisation, The First Band saw recorded is 1808 so by the late 1800s it wouldn’t have been unusual in a wheelwrights shop particularly  for sawing the sections of the rim called the felloes. The conventional method for doing these is first make a pattern from a piece of thin scrap, scribing the inner and outer arc with a pair of compasses. This is then transferred onto your piece of wood, which is then cut out on the band saw. That way you get a uniformity to the felloes, the spokes are cut to the same size, and when assembled everything runs true. I like to work to an accuracy of about 1mm, but then I use some modern machinery. For old wheels a difference of 3-4mm isn’t unusual but this set take it to extremes.

In taking this wheel apart, I discover the wood is very brittle and two of the felloe sections broke. So being clever I then used one held against a piece of ply to create a pattern and two new sections  are cut on the band saw and shaped with a spoke shave. When I tried to reassemble it all and experienced some difficulties, I stopped and went back and checked my measurements with a micrometre.  What I discovered was that each of the seven felloes sections is a different size, in length by up to 50mm, and in width by a margin of 8mm, from one end of the section to the other, and no two sections match. Therefore each spoke and each felloe is completely different, which means the centre of the wheel is off by about 15mm. Undoubtedly a boisterous ride. To compound the issue most of the wood is now completely dried out and breaks as soon as you touch it.

There are two solutions, if this was a museum piece, a carriage that never goes anywhere, then I would have to refit each piece individually, slowly and painfully working my way round. Or in this case as its a working governess cart replace all the felloes and spokes in one go, retaining the hub now in the centre, which should greatly improve the ride quality.

What this goes to show is, we look back at the Old Time Craftsmen and think they were experts, masters of their craft, but when you look closely you discover they had as many bodgers then as we have now, and this set is one of those.