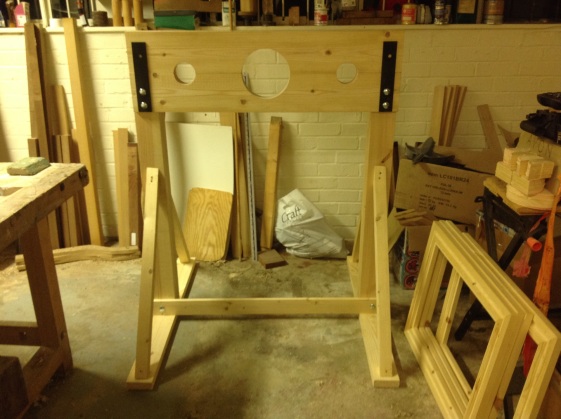 Another unusual day in my workshop, I wanted to start off by making a joke about how I need to control my apprentice but firstly I don’t have an apprentice and secondly someone would take it out of context and I would live to regret it, so I shall resist temptation.

So here’s my latest project a set of full size adult Medieval Stocks, which I have made as a prototype for a company that’s sells fundraising games. Apparently they are extremely popular at school fetes when you get to put the head teacher in the stocks and pelt them with wet sponges. I was well known to my head teacher as a lad so I like to think I am getting revenge albeit at a very safe distance, after all you wouldn’t want to cross my old head.

The first problem is where do you get the design from, everyone knows what they look like but no one can put actually put a dimension on it, so for the last couple of weeks I have been measuring  the wrists and asking the neck measurement’s of visitors to my workshop, and on one day that will go down in workshop folklore I had people bending over and leaning up against the wall in order to establish an average height.

The suggestion is having now made the prototype my customer will go on to place regular orders and I will go on to corner the market of Artisan Medieval Stocks Maker, as they say “to the crowned heads of Europe” and breath life into what has become a endangered craft.  But in the meantime I have to work out what to do with the prototype, maybe it is time to get an apprentice – don’t go there. In reality it goes to http://www.fitzrobbie.co.uk so if you want your own set they will be delighted to assist and you will know you are hoping to resurrect an extinct industry.